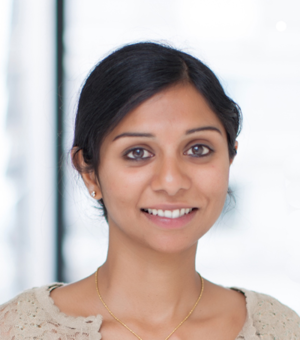 Madhavi Krishnan is Associate Professor of Physical Chemistry at the University of Oxford. She did her undergraduate work at Anna University, Madras, India followed by a PhD at the University of Michigan at Ann Arbor. Supported by Alexander von Humboldt and Marie Curie Fellowships she carried out postdoctoral work in single molecule biophysics and nano-optics at Technical University Dresden and ETH Zurich respectively. In 2012, following a brief stint as a Visiting Scholar at Harvard School of Engineering and Applied Sciences she was appointed Assistant Professor in Physical Chemistry at the University of Zurich and received a Professorship of the Swiss National Science Foundation. She was awarded the 2016 Nernst-Haber-Bodenstein prize in Physical Chemistry for her current research which examines molecular electrostatics in the fluid phase, including both experiment and theory. The group has recently pioneered an optical measurement technique that reads out molecular electrical charge with unprecedentedly high precision, and is also exploring the use of single molecules as probes for highly accurate measurements of interaction potentials in solution.